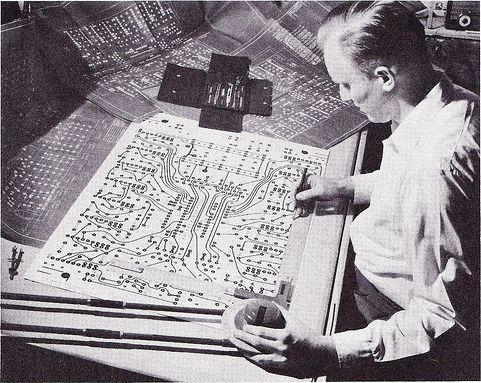 EM Electronics was formed in 1979. One of the earliest projects undertaken was the study of very low level DC amplification. Calculations and laboratory experiments were carried out to investigate the feasibility of detection in the nanovolt region, which appeared to be quite encouraging. The work progressed and after a period of development a prototype nanovoltmeter was produced.

The original prototype instrument was demonstrated to the Division of Electrical Science at the National Physical Laboratory in Teddington, and shortly after this a first instrument was ordered.

Word of the new instrument, designated the N1, spread and a number of technical journals, including ‘Physics Bulletin’ published articles, with the result that interest was shown, orders were received from various countries and EM low level detection equipment appeared in calibration institutions and research establishments in many countries.

Subsequently the National Physical Laboratory had a requirement for even lower levels of voltage measurement in their quest for more accurate determination of the basic unit of electric current. A study was undertaken and, following development, the first EM DC Picovoltmeter was produced.

Later, there was a further requirement in the conversion of AC to DC measurements for an amplifier which would detect ultra low levels of DC voltage with very high linearity. This development became the A7 which was upgraded to the A14 and the technology is applied and developed further in the new N51.

An area of research to which EM measurement techniques have been applied is the quantized Hall effect for very accurate resistance determination.

Frequent requests were made to connect EM Nanovoltmeters, Picovoltmeters, and Nanovolt Amplifiers to controlling computers via RS232 serial link or an IEEE parallel bus. This presented a problem because of the very low measurement level and the high degree of electrical noise generated by computers and transmitted on an IEEE bus.

EM Electronics won a Department of Trade and Industry ‘SMART’ award to enable research into the problems of isolating low level measurements, and after a program of intensive research and development, produced the capability to control ultra low level measuring instruments by computers, using complete optical isolation via a 2 metre optical fibre. This isolation capability was applied to the M17 Measurement System, then to the N31 and is now used in the N51.

Other research and development projects have been undertaken over the years since the first N1 was produced with the result that EM Electronics produced a range of instruments which includes detection down to a few picovolts, linearity to better than one part per million, a nanovoltmeter which, while remaining at room temperature, can efficiently measure a source at helium temperature and now the ability to make measurements with complete isolation.

A further field of development is low level DC amplifying modules. Small amplifiers, which can be mounted on a printed circuit board, fit into small spaces or be used economically in multi channel systems and which can measure down to nanovolt levels, are now an important part of the EM range. These modules are ideal for making thermocouple temperature measurements, and the detection level ensures that the measurement sensitivity is many times greater than was previously possible.
The comparatively low cost of these modules means that multi-channel systems, with amplification in each channel, are economically viable, and the scanning of the channels can now be accomplished at a higher level.

EM Electronics is now specialising on the development of a  new range of ultra low level DC amplifiers. The A10, A20 and A22 are being developed continuously to make use of new techniques and components as they become available. The A20 in particular is designed for extremely low level work, including the measurement of cryogenic sources.

Development is continuing and an exciting range of new products is planned.

The website will be updated with the latest information as the new amplifiers become available.